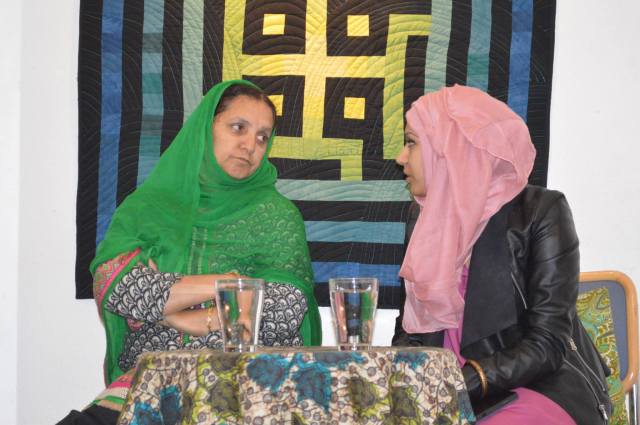 If you ask Jiji what she would like to eat, her response is always “Sanaa, koi fikar nahi, Allah hai na. Khaana mil jayega, bas mujhe apna kaam karna hai. Khaane ki koi fikar nahi” [Sanaa, don’t worry. Allah is with us. I just need to do my work, food will come and go. I have no worry about food.]

“Jiji aap apna bhi khayal rakha kareh..” [Mother, you need to take care of yourself too.]

Almost four weeks after she left and still all I can talk about are the moments we spent together. I was very fortunate to have the task that I did, to stay with and take care of Jiji during her stay here. I accompanied her entirely for six days, six days which I will never forget. It’s impossible to remain unchanged after spending moments in the company of a spirit such as hers.

I’ve been trying, contemplating how to put my experience into words over the last month but out of fear that these words will not measure up I have been unable run my fingers over a keyboard, in a way that might somehow capture what I am feeling. But even if these words fall short, I must attempt to write them.

Parveena Ahangar is the founder of APDP, the Association of Parents of Disappeared Persons in Srinagar, Indian Occupied Kashmir. Her son Javed Ahmad Ahangar was taken by Indian troops on 18th August 1990 in the early hours of the morning. Since this unfortunate night he has become one of many of Kashmir’s victims of enforced disappearances. It is estimated that between 8-10,000 Kashmiris have been subjected to enforced disappearances by the Indian State. In conversation Parveena ji told me she fears that the number is in fact much higher than the official estimates.

APDP lead by Parveena ji has campaigned globally for answers regarding the whereabouts of those enforcedly disappeared. Jiji has spent her life in service of her nation, she has vowed to fight until her last breath and it is because of her that Kashmir’s victims of enforced disappearances have not become another faceless statistic. I too have a brother who is a victim of India’s practise of enforced disappearance; his name is Javed Ahmad Ahangar. Javed bhai is not only alive in Parveena ji’s memory; he lives vividly within everybody who has had the honour of her presence.

But it is not merely her struggle as the Mother of the disappeared which inspires. The nature of APDP’s work means that Parveena ji has met victims of the whole spectrum of India’s brutalities in Kashmir. Her work as an apolitical figure providing physical, emotional and psychological support to victims has created her a position in society that no other has been able to fulfil. APDP has made a promise to deliver relief and under the leadership of Jiji it is doing everything within and beyond its capacity to ensure these promises are met.

In the six days I spent by Parveena Ahangar’s side I learnt more about the struggle than I have learnt in my nineteen years of life. I found a woman who has the biggest heart I have ever encountered and the strongest spirit I will ever know. Somewhere within her unique mix of characteristics I found a Mother, a leader and an essential member of her community. To be one who makes change for the people, you have to be a part of their community. She personifies these sentiments.

Jiji says “APDP ek Maa ke dardh se ban’na hai. Maa keh dardh jaise aur koi jazba nahi.” [APDP was founded from a Mother’s suffering. There is no emotion that compares to a mother’s pain.]
It is a simple statement to make but Parveena ji embodies each syllable with painful ease. I wish she didn’t have to, but I am so proud that she does. The sincerity with which she carries herself should give us all something to aspire to.

She is funny. Despite the harsh reality she has been subjected to Jiji has a wonderful sense of humour. She is soft hearted. She is a lioness and she likes ice cream, chocolate ice cream. We laughed together. We shared a prayer mat and knelt before our Lord and cried; wiped away each other’s tears. In her eyes I saw what it means to be a woman from a country like ours.

I told her she is the one who taught me “Ham darneh vaale nahi hai, ham marne vaale hai. Allah hamaare saath hai.” [We are not of those who fear, one day we will die. Allah is with us]

She laughed and said you remember my words well. How could I not? Her unwavering strength and relentless spirit has left an imprint on me that will not wash away. A mother’s hand on her child’s head never does and within just a few moments of our meeting Parveena Ahangar became my mother too.

Crossing the mountains of Home is a now promise written in stone because just as you miss your mother when you are far from home, I miss her.

If you meet my mother, give her my love, hugs and kisses. Tell her of the love and pride with which her daughter still speaks of her.