Abdullah Yassin – A prisoner from Bil’in

Today I spoke to Iyas Abu Rahmah a young photojournalist from the village of Bil’in who photographed his best friends arrest in order to show the outside world the crimes committed against the Palestinian people. This is a job well known to the courageous youth of Palestine and a job which Abdullah Yassin also called his own.

On Thursday the 12th of April Abdullah Yassin a 21 year old photographer was arrested during the seventh International Bil’in Conference in Hebron.  As the conference was in its second day Israeli forces began to arrest activists in an attempt to thwart the resistance.

Abdullah whose family are indigenous residents of Bil’in was at the conference to show his solidarity with the people of Bil’in, photograph the conference and show his right to the land of his ancestors birth.  Abdullah is the youngest of four brothers and his father has passed away. His mother is in good health but is missing her youngest son dearly.

Abdullah was previously arrested in 2005 at the age of fourteen, for two and a half months due to his involvement in peaceful protests against the Apartheid wall that ran through the land of the villagers of Bil’in. As a child he had tasted life inside a prison of the occupation and seen the violations of human rights the occupiers were willing to enforce in order to silence the resistance of the Palestinian people.

Iyas said “I am sad at his arrest and I’m upset because Abdullah’s mother is worried. Tomorrow is the first court session and his mother is eager to see him this helplessness breaks my heart. I feel lonely because Abdullah is not here but I am proud of him. Israel is violating international human rights laws, for Abdullah please do not remain silent. I want the international community to call for sanctions against Israel for its daily violations of human rights against my people.”

Arrests like Abdullah’s are common in Palestine and many young people are arrested for merely photographing demonstrations or throwing stones in order to tell others who wish to do the same that this is not going to be tolerated by the occupiers but regardless of the threats of detention the youth of Palestine continue to fight against all odds.

It is our duty to have these stories heard and to put a name to the individuals who are struggling so hard for justice.

Return Iyas’s best friend to him, return Abdullah to his mother.
Dry the eyes of our beloved Palestine. 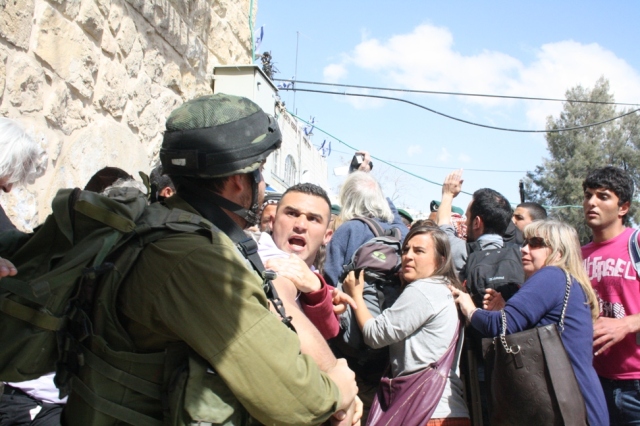 One thought on “Abdullah Yassin – A prisoner from Bil’in”